Info
Alpha Coders 1 Wallpapers 1 Phone Wallpapers 16 Images
Interact with the Game: Favorite I'm Playing This I've Played This I Own This I've Beat This Want To Beat This Want To Play This Want To Buy This
The Secret of Monkey Island is a 1990 point-and-click graphic adventure game developed and published by Lucasfilm Games. It takes place in a fantastic version of the Caribbean during the age of piracy. The player assumes the role of Guybrush Threepwood, a young man who dreams of becoming a pirate and explores fictional islands while solving puzzles. The game was conceived in 1988 by Lucasfilm employee Ron Gilbert, who designed it with Tim Schafer and Dave Grossman. Gilbert's frustrations with contemporary adventure titles led him to make the player character's death impossible, which meant that gameplay focused the game on exploration. The atmosphere was based on that of the Pirates of the Caribbean theme park ride. The Secret of Monkey Island was the fifth game built with the SCUMM engine, which was heavily modified to include a more user-friendly interface. Critics praised The Secret of Monkey Island for its humor, audiovisuals, and gameplay. The game spawned a number of sequels, collectively known as the Monkey Island series. Gilbert, Schafer and Grossman also led the development of the sequel Monkey Island 2: LeChuck's Revenge. LucasArts released a remake of the original in 2009, which was also well received by the gaming press. The Secret of Monkey Island is a 2D adventure game played from a third-person perspective. Via a point-and-click interface, the player guides protagonist Guybrush Threepwood through the game's world and interacts with the environment by selecting from twelve verb commands (nine in newer versions) such as "talk to" for communicating with characters and "pick up" for collecting items between commands and the world's objects in order to successfully solve puzzles and thus progress in the game. While conversing with other characters, the player may choose between topics for discussion that are listed in a dialog tree; the game is one of the first to incorporate such a system. The in-game action is frequently interrupted by cutscenes: non-interactive animated sequences that are used to provide information about character personalities and advance the plot. Like other LucasArts adventure games, The Secret of Monkey Island features a design philosophy that makes the player character's death nearly impossible (Guybrush does drown if he stays underwater for more than ten minutes).
Game Info
Franchise: -
Released: 1990-10-31
Players: 1
Publisher: US Gold
Developer: Lucasfilm
Platforms: Sega CD PC Amiga Atari ST Mac PlayStation 3 Xbox 360 Games Store PlayStation Network (PS3) iPhone FM Towns Commodore CDTV
Genres: Adventure
Tags: 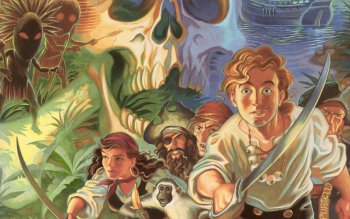 Indiana Jones and the Fate of Atlantis
Torin's Passage
Simon the Sorcerer II: The Lion, the Wizard and the Wardrobe

Zak McKracken and the Alien Mindbenders
Inherit the Earth: Quest for the Orb