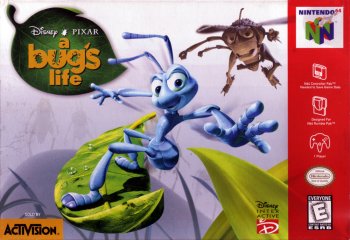 Interact with the Game: Favorite I'm Playing This I've Played This I Own This I've Beat This Want To Beat This Want To Play This Want To Buy This
Pixar's second animated feature, A Bug's Life, arrived in movie theatres in 1998, and the videogame adaptation was released on the Nintendo GameBoy Color and the Sony Playstation. It wasn't supposed to appear on the Genesis at all -- Sega's 16-bit system was well past its commercial prime by the late 1990's, even on the hand-me-down/bedroom system basis that tends to keep a trickle of kids' titles coming late in a console's life. And it never did in any legal form. But enterprising Asian game pirates saw an opportunity to cash in on Sega and Disney in one go, and thus this wholly unlicensed conversion of the GameBoy Color version of A Bug's Life appeared on the Genesis:
Game Info
Franchise: -
Released: 1997-10-31
ESRB: E - Everyone
Players: 1
Publisher: Sega
Developer: Pirate Games
Platforms: Sony Playstation Sega Genesis
Genres: Platform
Tags: