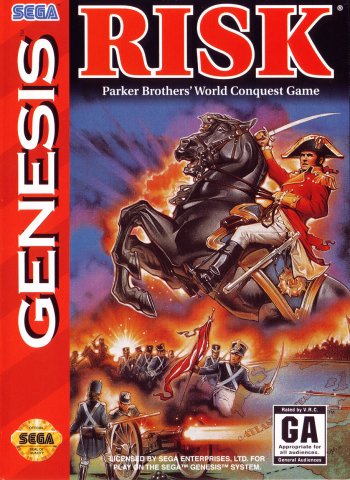 Info
Alpha Coders 4 Images
Interact with the Game: Favorite I'm Playing This I've Played This I Own This I've Beat This Want To Beat This Want To Play This Want To Buy This
Risk is a strategy board game produced by Parker Brothers (now a division of Hasbro). Winning Moves also makes a classic 1959 version. It was invented by French film director Albert Lamorisse and originally released in 1957 as La Conquête du Monde ("The Conquest of the World") in France. It was later bought by Parker Brothers and released in 1959 with some modifications to the rules as Risk: The Continental Game, then as Risk: The Game of Global Domination.[2] Risk is a turn-based game for two to six players.[1] The standard version is played on a board depicting a political map of the Earth, divided into forty-two territories, which are grouped into six continents. The object of the game is to occupy every territory on the board and in doing so, eliminate the other players.[3] Players control armies with which they attempt to capture territories from other players, with results determined by dice rolls.
Game Info
Franchise: -
Released: 2014-12-17
ESRB: E - Everyone
Developer:
Platforms: PC Sony Playstation Sega Genesis PlayStation Network (PS3) Xbox One PlayStation 4 Nintendo Switch
Genres: Strategy Trivia/Board Game
Tags: