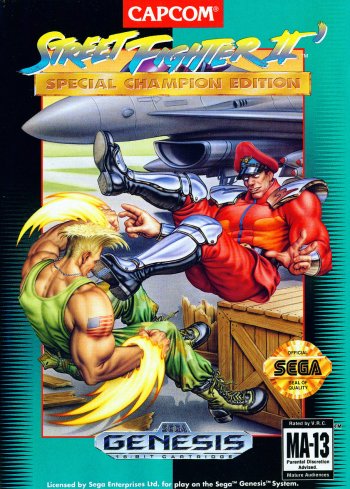 Interact with the Game: Favorite I'm Playing This I've Played This I Own This I've Beat This Want To Beat This Want To Play This Want To Buy This
Street Fighter II′ is an 8-bit version of Capcom's revolutionary arcade fighting game Street Fighter II to the Sega Master System by TecToy in 1997. It is not a port of any specific version of Street Fighter II, but rather it is a mix between the Mega Drive versions of Street Fighter II': Special Champion Edition and Super Street Fighter II: The New Challengers, mixing elements from both. The title itself, Street Fighter II′, features the same blue fonts as the Champion Edition logo, as well as the prime symbol (′) next to the numeral, which is pronounced Dash in Japan, but is usually unspoken overseas. Though severely watered down due to the weaker hardware of the SMS, this version of Street Fighter II is still a reasonably faithful rendition of the game. It also features the announcer's vocals which the Mega Drive's Special Champion Edition lacked. However, the game is held back by a lack of moves (the Master System only has two buttons on its controller, as opposed to the six used in the arcade game) and character voice samples, and the framerate is low. The music has also been tweaked in places. The SMS version only retains 8 fighters out of the 12 character roster from Special Champion Edition. E. Honda, Zangief, Dhalsim and Vega (Claw) are the four fighters who did not made the cut. None of the additional fighters from New Challengers (Cammy, T. Hawk, Fei-Long and Dee-Jay) are present either, despite the use of character portraits from that version. The character-specific endings are also not present in this version either: instead the ending screen consists of portraits of Balrog, Sagat and M. Bison (the same ones used in Special Champion Edition when the player clears the game using a boss character) with a generic message underneath. The staff roll is also lifted straight from Special Champion Editon, but with the addition of people who worked specifically on this version.
Game Info
Franchise: Street Fighter
Released: 1997-09-01
ESRB: T - Teen
Players: 2
Publisher: Tectoy
Developer: Capcom
Platforms: Sega Master System Super Nintendo (SNES) Arcade Commodore 64 PC Amiga Nintendo Entertainment System (NES)
Genres: Fighting
Tags:
Part of the Street Fighter Fan Club
Street Fighter Fan Club 499 Wallpapers 112 Art 2045 Images 113 Avatars 40 Gifs 58 Games 10 Movies 2 TV Shows