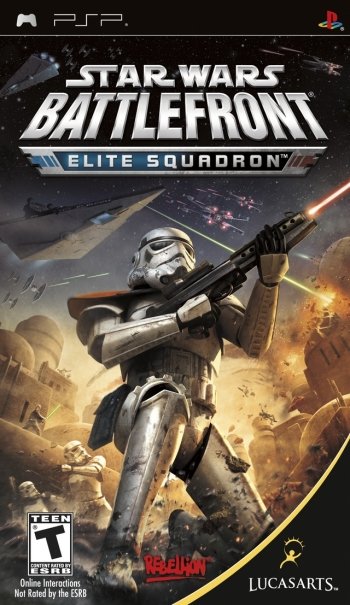 Info
2 Wallpapers 2 Mobile Walls 2 Art 3 Images 2 Avatars 1 Covers
Interact with the Game: Favorite I'm Playing This I've Played This I Own This I've Beat This Want To Beat This Want To Play This Want To Buy This
Star Wars Battlefront: Elite Squadron is a third-person shooter video game, part of the Star Wars: Battlefront series released November 3, 2009 on the Nintendo DS and PlayStation Portable. Gameplay[edit] Elite Squadron allows players to participate in combat on foot, in ground vehicles or in space. Players are also able to enter capital ships and, once the shields are down, fight the enemy inside on foot. The ground-space transitions are accompanied by short cutscenes while the game loads the next area.[2] The same is also true of entering or exiting a capital ship.[3] This is the first Battlefront game to allow players to fly from ground to space battles.[4] The consequences of each battle will depend on the players actions, meaning that each individual enemy killed can affect the outcome of a result.[2] The battlefront will not be one giant, seamless map, but a compilation of inter-connected, smaller size areas, each one capable of affecting the other.[3] Elite Squadron features "Heroes and Villains" gameplay. It includes playable characters such as Luke Skywalker, Boba Fett, Darth Vader, Darth Maul, The Emperor and Kit Fisto, and the Heroes and Villains mode (Assault Mode) last featured in Star Wars: Battlefront II.[1] Pre-release screenshots also show that General Rahm Kota, a character from Star Wars: The Force Unleashed is playable, as well as other characters from Renegade Squadron, such as Col Serra. The Heroes and Villains mode is displayed quite conveniently after a demo had been released on the PlayStation Network. Other game modes have been implied, with a focus on multiplayer, such as a deathmatch mode. Also, the Galactic Conquest mode, has undergone an enhancement on the PSP. In Galactic Conquest, two players are able to share a single PSP, and compete against each other in a strategy based game mode.[2][5] PSP Players are able to mix elements from the Star Wars saga and put them into locations and situations that never happened, allowing for full customization.[6] The story mode has been called "a huge step up from previous story modes",[7] and was praised for incorporating the controls into the mission. It was also revealed that making progress in the story, and completing objectives, was the way to unlock customization props.[7]
Game Info
Franchise: Star Wars
Released: 2009-11-03
ESRB: T - Teen
Players: 1
Publisher:
Developer:
Platforms: Sony PSP Sony Playstation Portable PlayStation Portable Nintendo DS
Genres: Action Shooter Vehicular Combat
Tags:
Part of the Star Wars Fan Club
Star Wars Fan Club 3566 Wallpapers 817 Art 2095 Images 2473 Avatars 542 Gifs 1736 Covers 105 Games 38 Movies 5 TV Shows 5 Discussions 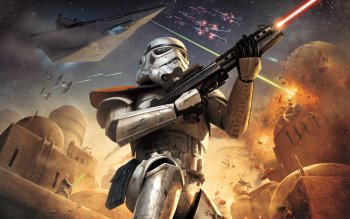 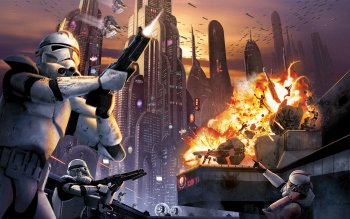 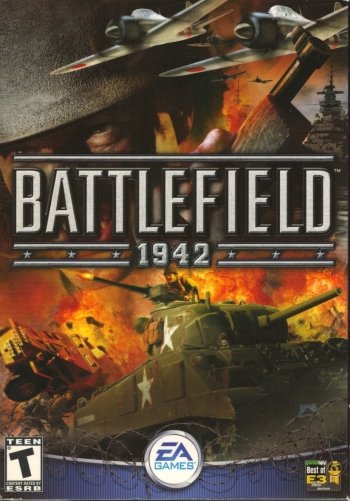 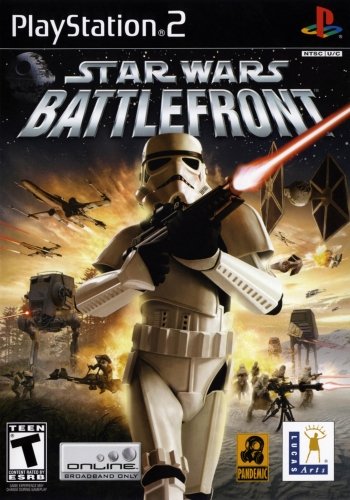