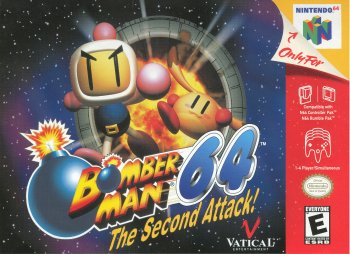 Info
Alpha Coders 5 Images
Interact with the Game: Favorite I'm Playing This I've Played This I Own This I've Beat This Want To Beat This Want To Play This Want To Buy This
Of the great discoveries in the universe, few are more important than the legendary 8 elements. When the evil Rukifellth found one of these elements - the powerful Celestial Stone - he used his influence to assemble the dreaded BHB Army. Armed with his new army and a giant space warship, the power-crazed Rukifellth began scouring the galaxy for the other 7 elements, invading planets and enslaving innocent races throughout the galaxy. Rukifellth controls these enslaved planets with special Gravity Generators - the same devices the BHB Army used to create a Black Hole. Rukifellth uses his Black Hole to capture new planets... But he should have thought twice before he tried to capture Bomber Planet!
Game Info
Franchise: -
Released: 2000-02-22
ESRB: E - Everyone
Players: 4+
Publisher: Vatical Entertainment
Developer: Hudson Soft
Platforms: Nintendo 64
Genres: Action
Tags: