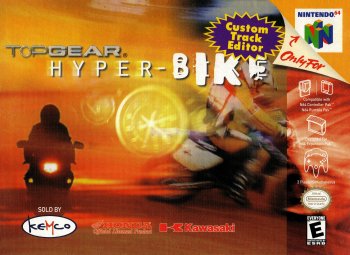 Info
Alpha Coders 3 Images
Interact with the Game: Favorite I'm Playing This I've Played This I Own This I've Beat This Want To Beat This Want To Play This Want To Buy This
Motorbike racer set in the Top Gear series. The Championship mode has you alternating between dirt and street racing as you compete for points. You earn new bikes and courses along the way like many other games, but interesting twist is going from one kind of racing to the other. The physics of each type of racing are very different, and you'll have to switch back and forth between dirt and racing tactics on the fly. The dirt bike racing is a lot more arcadey with all of the jumps and wide open tracks. You can earn turbo by pulling off tricks and there's really nothing to stop you from testing your stunt skills while racing except your own nerve and imagination. In this way, Hyperbike is like Hydro Thunder where you're expected to lean on that turbo button the whole time and it's up to your racing skills to ensure there's turbo available.
Game Info
Franchise: -
Released: 2000-03-21
ESRB: E - Everyone
Players: 2
Publisher: Kemco
Developer: Snowblind Studios
Platforms: Nintendo 64
Genres: Racing Sports Driving/Racing
Tags: