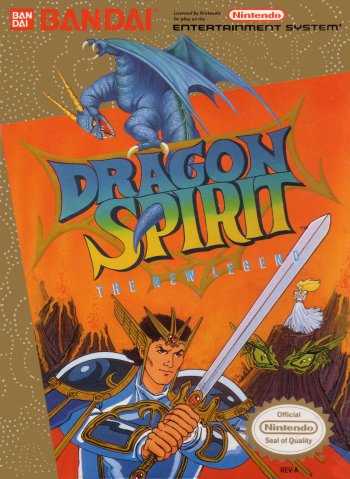 Info
Alpha Coders 5 Images
Interact with the Game: Favorite I'm Playing This I've Played This I Own This I've Beat This Want To Beat This Want To Play This Want To Buy This
After a millennium of captivity, an ugly serpent demon named Zawell escapes imprisonment and kidnaps Alicia, princess to the kingdom of Mitgult. A young, crafty soldier Amul is selected to rescue the princess and destroy Zawell. In praying to the gods for strength and courage, he points his sword high toward the heavens. Suddenly he is transformed into an all-powerful blue dragon, bestowed with special powers. Though gifted with a lethal air and ground attack, this is not enough. He must locate and obtain extra powers along the way. The demon has instructed nine of the mightiest beasts to stop Amul before reaching his goal.
Game Info
Franchise: -
Released: 1990-06-30
ESRB: E - Everyone
Players: 1
Publisher: Namco
Developer: Namco
Platforms: Nintendo Entertainment System (NES) Nintendo Entertainment System
Genres: Shooter Action Shoot 'Em Up
Tags: