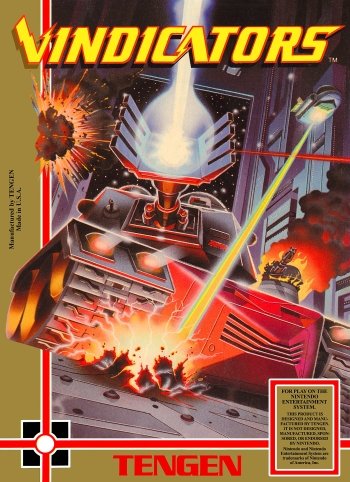 Info
4 Images
Interact with the Game: Favorite I'm Playing This I've Played This I Own This I've Beat This Want To Beat This Want To Play This Want To Buy This
he game begins by asking the player(s) to choose a difficulty level, not only making the enemies more difficult and the players weaker, but higher difficulties start the players in a later set of levels (called "galaxies") and with some powerups. The easiest difficulty level starts the player(s) in the first level with no bonuses. The player controls a tank with constantly draining fuel, and must navigate through multiple levels (14 stations in the arcade version) from bottom to top, encountering obstacles and enemies. Along the way, a player may find powerups including tank fuel, stars (currency), shields, and two types of sub-weapons: smart shots (homing missiles) and bombs (powerful rockets). Each level has a key that will open a door at the top of the level, which will either take the player to the next level or to a special hub with multiple powerups that must be escaped in 10 seconds or less. If the player is unable to escape, the tank will lose half its fuel. After escaping the hub, the player(s) then proceeds to the next station. Occasionally, the player(s) will face a boss that must be defeated to advance. Normal shots are ineffective however, and the player must decide/guess the appropriate time to buy sub-weapons to greatly raise the chance of victory. After destroying a boss, the player(s) can continue to the end of the level. Between levels, the player is taken to a shop where items and upgrades to tank speed, power, etc. may be purchased with stars. Any damage caused to the player's tank will decrease the shield level. Purchasing a shield drastically reduces damage down to a mere pixel worth of the fuel gauge per hit. When the fuel depletes, the speed of the tank is reduced to a crawl and a countdown begins from 10. If no fuel is gained before the timer reaches zero, or if the player is shot during the countdown, the tank explodes and a life is lost. The arcade version, in addition to having special two-joystick controls for each player, contained three special contest levels, with one contest star in each. With three contest stars and nine normal stars, the player(s) could compete in a special time-limited contest level in which the player could win a T-shirt. A later version of the game was released which eliminated the contest levels and stars.
Game Info
Franchise: -
Released: 1988-12-31
Players: 2
Play Modes: Coop
Developer: Atari
Platforms: Nintendo Entertainment System (NES) Arcade Amstrad CPC Commodore 64 ZX Spectrum
Genres: Action Shooter Platformer
Tags: