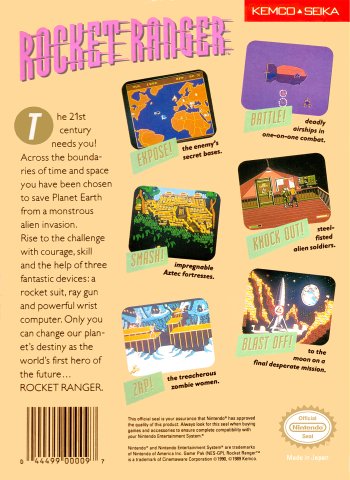 Info
Alpha Coders 5 Images
Interact with the Game: Favorite I'm Playing This I've Played This I Own This I've Beat This Want To Beat This Want To Play This Want To Buy This
Rocket Ranger is a 1988 action adventure computer game developed and published by Cinemaware. Like many Cinemaware games, Rocket Ranger draws its inspiration from Hollywood, and likely The Rocketeer comics. This title pays homage to the many 1950s sci-fi serials, using the look and feel of the serials, including action-packed cut-scenes and an art treatment loyal to the futuristic visions of that era. It also features the cliché elements of that era, including a dashing, courageous hero and a beautiful, voluptuous damsel in distress in need of rescue. A Kickstarter campaign for a remake was launched on November 13, 2014.[1]
Game Info
Franchise: -
Released: 1988-12-31
Developer:
Platforms: Nintendo Entertainment System (NES) Commodore 64 Amiga Atari ST Nintendo Entertainment System Apple IIgs PC
Genres: Action Adventure
Tags:

It Came From The Desert