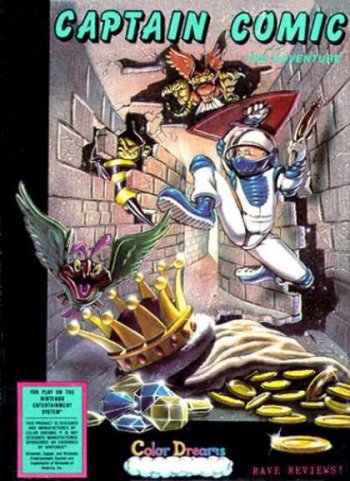 The Adventures of Captain Comic

Info
1 Images
Interact with the Game: Favorite I'm Playing This I've Played This I Own This I've Beat This Want To Beat This Want To Play This Want To Buy This
The Adventures of Captain Comic (or just Captain Comic) is a classic 1988 MS-DOS platform game which is known for being one of the first side-scrolling games made for IBM PC. It was developed entirely by Michael Denio. The PC version of the game was distributed as shareware. Later a version for the NES was published by Color Dreams as an unlicensed title. An unofficial conversion for the SAM Coupé also exists[1]. It was also cloned as "The Adventures of Pioneer Ksenia" in 1990 by a team of Ukrainian programmers. Gameplay of Captain Comic In the game, the player takes control of Captain Comic, who is on a mission to the planet Tambi to recover three treasures stolen from the planet Omsoc.
Game Info
Franchise: -
Released: 1988-05-01
Developer: Michael Denio
Platforms: PC Nintendo Entertainment System SAM Coupé
Genres: Platform Action Platformer
Tags:

Castle of Deceit
Jill of the Jungle