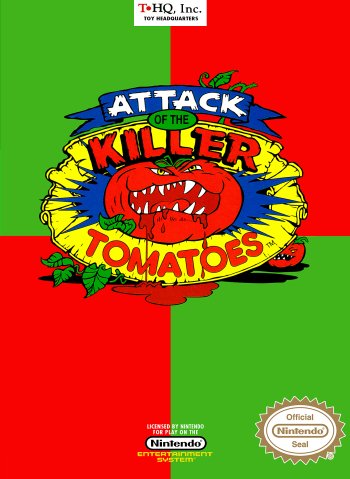 Attack of the Killer Tomatoes

Info
Alpha Coders 2 Images
Interact with the Game: Favorite I'm Playing This I've Played This I Own This I've Beat This Want To Beat This Want To Play This Want To Buy This
Attack of the Killer Tomatoes is a computer game released in 1986 for the Sinclair Spectrum, Amstrad CPC and MSX. It is based on the 1978 comedy film of the same name. The player takes control of Wimp Plasbot, who works in a tomato puree plant, and must rid the plant of the mutated killer tomatoes, referred to in the title.
Game Info
Franchise: -
Released: 1991-12-31
Developer:
Platforms: Amstrad CPC Nintendo Entertainment System (NES) Game Boy MSX ZX Spectrum Nintendo Entertainment System
Genres: Action
Tags: