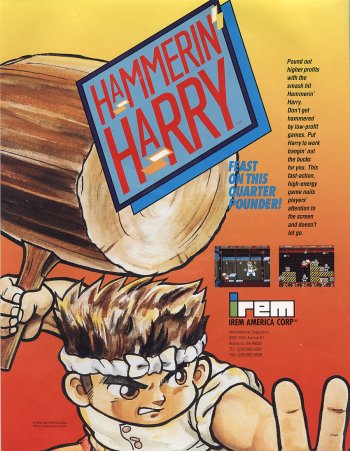 Info
Alpha Coders 5 Images
Interact with the Game: Favorite I'm Playing This I've Played This I Own This I've Beat This Want To Beat This Want To Play This Want To Buy This
Hammerin' Harry, or Daiku no Gen-san ("Gen the Carpenter"), is a side-scrolling platformer and the first game in Irem's Hammerin' Harry/Daiku no Gen-san series. Harry/Gen takes on the Rusty Nail Construction Company after it destroys his home as part of their construction work. Harry's main weapon is an enormous mallet that he uses both for offense and defense: he can hold it out in front and above to shield himself from projectiles. Harry/Gen can also find power-ups to give himself more health or temporarily strengthen his hammer. The game was originally released in the arcade before being ported to the NES and Famicom later the same year. This port was only available in Japan and Europe.
Game Info
Franchise: -
Released: 0000-00-00
Players: 2
Publisher:
Developer:
Platforms: Arcade
Genres: Platform
Tags: