Game Abyss Indiana Jones and the Temple of Doom

Indiana Jones and the Temple of Doom

Interact with the Game: Favorite I'm Playing This I've Played This I Own This I've Beat This Want To Beat This Want To Play This Want To Buy This
Indiana Jones and The Temple of Doom is a 1985 action arcade game developed and published by Atari Games, based on the 1984 film of the same name, the second film in the Indiana Jones franchise. It is also the first Atari System 1 arcade game to include digitized speech, including voice clips of Harrison Ford as Indiana Jones and Amrish Puri as Mola Ram, as well as John Williams' music from the film. The player assumes the role of Indiana Jones as he infiltrates the lair of the evil Thuggee cult, armed only with his trademark whip. The player's ultimate goal is to free the children the cult has kidnapped as slaves, recover the stolen relics known as "Sankara Stones," and escape from the titular temple. Throughout Temple of Doom's several modes of gameplay, Indy loses a life if hit once (sustaining physical contact with enemies or other hazards), or from falling onto a walkable surface from too far a height. After choosing a difficulty level, the player begins the game, initially composed of three levels, each based on specific scenes from the film
Game Info
Platforms: Arcade Nintendo Entertainment System (NES) Commodore 64 PC Amiga Amstrad CPC Apple II Atari ST MSX ZX Spectrum Nintendo Entertainment System
Franchise: Indiana Jones
Released: 1985-08-01
Publisher:
Developer:
Rating: 0.00
Genres:
Tags:
Part of the Indiana Jones Fan Club
Indiana Jones Fan Club 40 Wallpapers 73 Art 149 Images 1 Avatars 2 Gifs 4 Covers 16 Games 9 Movies 2 TV Shows

Recent Indiana Jones and the Temple of Doom Wallpapers 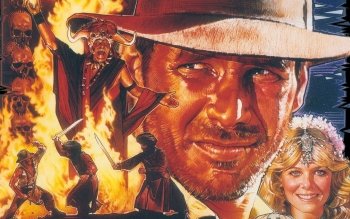