Joshua & The Battle of Jericho

Interact with the Game: Favorite I'm Playing This I've Played This I Own This I've Beat This Want To Beat This Want To Play This Want To Buy This
Crystal Mines is a 1989 unlicensed puzzle game for the NES by Color Dreams. When they established Wisdom Tree, they repackaged the game twice: in 1991 as Exodus: Journey to the Promised Land and in 1992 as Joshua & The Battle of Jericho, with Joshua labeled a sequel to Exodus. These two versions would be remade for the Sega Mega Drive in 1993 and 1994, respectively. Though the games do have a TMSS check, they will only do the $A14000 write if they detect the region of the console they are running on as US — therefore, the games will only boot on either any US Mega Drive or on any other Model 1 Mega Drive without TMSS (making that a partly useless form of region lockout). Gameplay of both versions is identical: you are the main character (Moses or Joshua, respectively) and you must collect all the bags with M on them (Joshua: coins with $ on them) scattered throughout each maze. A and C shoot; you can hold them down for rapidfire. Shooting destroys blockades and enemies. Once all the M bags are gathered, find the exit to move on to the next level. In between each level, you must answer a bunch of questions related to the story of the Bible of the game's theme; getting them wrong appears to be inconsequential to the outcome of the game (this needs investigation).
Game Info
Franchise: -
Released: 1992-12-31
Publisher: Wisdom Tree
Developer: Wisdom Tree
Platforms: Nintendo Game Boy Sega Genesis Game Boy Genesis Nintendo Entertainment System PC
Genres: Puzzle Action Educational
Tags: 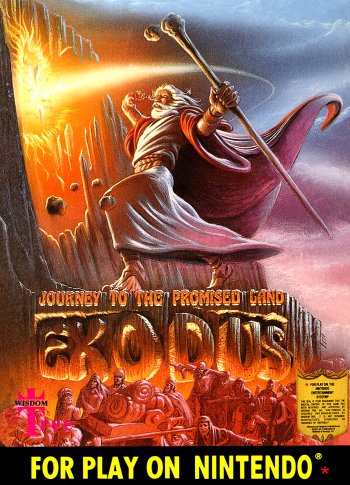