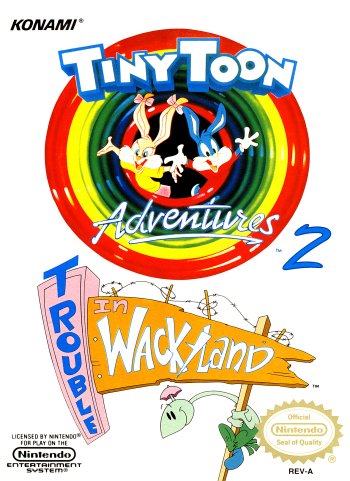 Info
2 Images
Interact with the Game: Favorite I'm Playing This I've Played This I Own This I've Beat This Want To Beat This Want To Play This Want To Buy This
There is a new amusement park in Acme Acres, and everyone has been invited to visit by a "Secret Admirer". There are five areas which the player can explore, each one starring a different character. Plucky rides a bumper car. Hamton rides a tricky train trip. Babs rides the rollercoaster. Furrball dodges Sweetie as he goes for a wild log ride. And Buster faces the thrills and chills of the Funhouse. Each ride costs a certain amount of tickets, but as the player racks up points on the various rides, more tickets are earned. Eventually, when enough tickets have been earned, they can be saved until the player has enough to afford the entrance fee to the Funhouse, where Buster Bunny must then navigate numerous obstacles before squaring off with the "Secret Admirer", who turns out to be Montana Max. Just like in the first game, Roderick Rat is there to try to interfere, plus other villain characters. Other Tiny Toon characters also make appearances in varying degrees.
Game Info
Franchise: -
Released: 1993-04-30
Players: 1
Publisher: Konami
Developer: Konami
Platforms: Nintendo Entertainment System (NES) Nintendo Entertainment System
Genres: Platform Action
Tags: