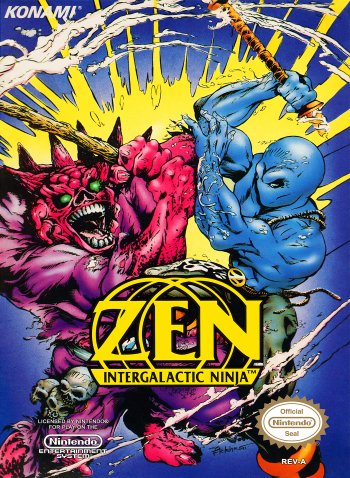 Info
Alpha Coders 2 Images
Interact with the Game: Favorite I'm Playing This I've Played This I Own This I've Beat This Want To Beat This Want To Play This Want To Buy This
IF YOU LIKE FIGHTING DIRTY, YOU'RE GONNA DIG ZEN! The greatest environmental disaster in human history is about to hit your backyard. But you're not backing down, because you're Zen, a cold-blooded Ninja warrior who's come to Earth to clean the clock of Lord Contaminous and his crud-loving cronies. But wasting these slimeballs won't be easy. Because they'll spew forth the most hazardous graphics ever to wreak havoc on your NES. We're talking horizontal, vertical and 3/4 view scrolling that will give you a whole new perspective on acid rain, oil spills and ozone-ravaging smog. And wait till you see the fluid character movements. They're hotter than a uranium-oozing nuclear meltdown! There are 12 total levels, each with its own ecological enemies, toxic traps and pollution-fighting objectives. You'll battle oil rig fires, trying to save trapped workers. Use your Photon-Stick to zap gaseous garbage men on a high-speed plutonium mining car ride. Vertical jump through two separate screens to reach a venomous vixen who's single-handedly scorching the rainforests. And spin kick Smogger, a smoked-out scum of the Earth. Finally, try to survive a rescue mission stage. Rack up points in the bonus recycling level. And slash through 6 subgames that will lead you to the feet of Lord Contaminous, who you must dispose of before he trashes every living thing on the face of the Earth. For 1 Ninja Master.
Game Info
Franchise: -
Released: 1993-03-07
Players: 1
Publisher: Konami
Developer: Konami
Platforms: Nintendo Game Boy Nintendo Entertainment System (NES) Game Boy Nintendo Entertainment System
Genres: Action
Tags: