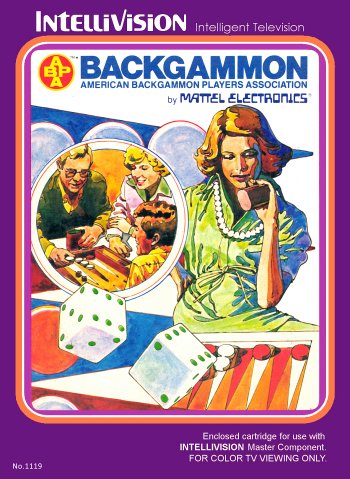 Info
Alpha Coders 1 Images
Interact with the Game: Favorite I'm Playing This I've Played This I Own This I've Beat This Want To Beat This Want To Play This Want To Buy This
Intellivision Backgammon is identical with the board game. Backgammon is a game played by two players (the computer can be one of the players). Each player has 15 pieces. The object of the game is to be the first to move all your pieces completely around and finally off the board. Moving your pieces off the board is called "bearing off". The first player to bear off all his pieces is the winner. Each player moves in a direction beginning from his opponent's Home Table and coming around to his own Home Table. Thus one player always moves clockwise and the other always counterclockwise. You can play against the computer at two skill levels - one for beginners or intermediate, another for experts - or two players can compete against each other. It displays the American Backgammon Players Association (ABPA) logo.
Game Info
Franchise: -
Released: 1979-12-31
Players: 1
Publisher: Mattel Electronics
Developer: APh Technological Consulting
Platforms: Intellivision
Genres: Strategy
Tags: