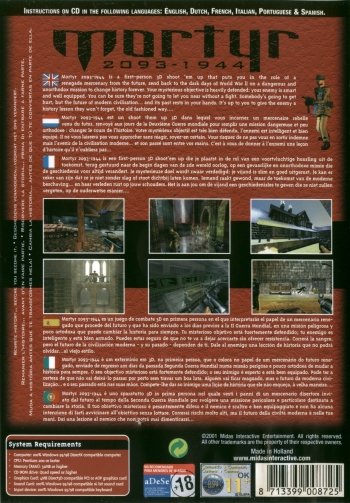 Info
3 Images
Interact with the Game: Favorite I'm Playing This I've Played This I Own This I've Beat This Want To Beat This Want To Play This Want To Buy This
In 1944, unexpectedly for the Allies, a Nazi winter offensive results in over 80% of European territories falling to German control. No one really knows what Hitler and his generals did to bring forth this course of events, but the fall of London made it clear that the Allies had little chance of winning the war. Soon after, the destruction of Moscow and the taking of Washington ended the war. It was hard to believe that it was the German military technique or their leaders' tactical skills. People started to talk about final development of the Wunderwaffe, especially that not many managed to flee from the battlefields to tell what they have seen - their reports were unclear and not explaining anything. Nevertheless the world was unable to stop the Führer and his Reich. In the year 2093, 148 years after the end of the war, the overwhelming Reich rules the Earth under totalitarianism, but Armageddon is nearing. The victory of German troops brought not only terror of Nazi dictatorship but also mysterious weather changes, which are seemingly leading the world towards destruction. General Jurgen Mortyr thinks that the Nazis are somehow responsible for the growing number of disasters and weather changes. The only way to prevent the destruction of mankind is to travel back in time to 1944. General Mortyr assigns his son, Sebastian, the mission to investigate and stop the events that could destroy the future of mankind.
Game Info
Franchise: -
Released: 2005-03-04
Publisher: Interplay
Developer: Mirage
Platforms: PC
Genres: Shooter
Tags: