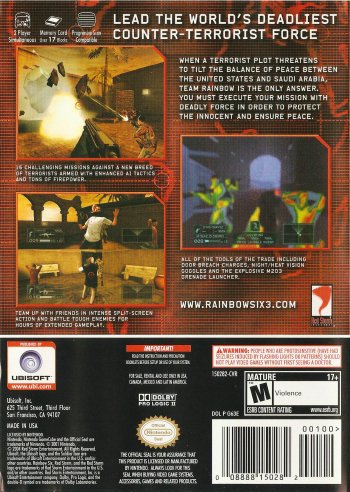 Interact with the Game: Favorite I'm Playing This I've Played This I Own This I've Beat This Want To Beat This Want To Play This Want To Buy This
Rainbow responds to a series of terrorist attacks against US interests in South America, apparently being conducted by Islamic terrorists sponsored by Saudi Arabia. However, the true mastermind behind the attacks is actually the newly elected President of Venezuela, Juan Crespo. Crespo managed to get elected by advocating a strong anti-terror platform and exploiting the fear caused by the terrorist attacks (which he himself orchestrated). Crespo's plan is to discredit Saudi Arabia, then cut off the Venezuelan supply of oil to the United States, creating an oil crisis and driving up the price of oil, which he would then sell to the US on the black market at highly inflated prices. Rainbow manages to foil Crespo's plans, and ultimately assassinates President Crespo himself. Rainbow then arranges for the international media to credit the terrorists with causing Crespo's death.
Game Info
Franchise: -
Released: 2004-06-17
ESRB: M - Mature
Players: 2
Publisher: Ubisoft
Developer: Red Storm
Platforms: Nintendo GameCube Microsoft Xbox Sony Playstation 2
Genres: Shooter
Tags: