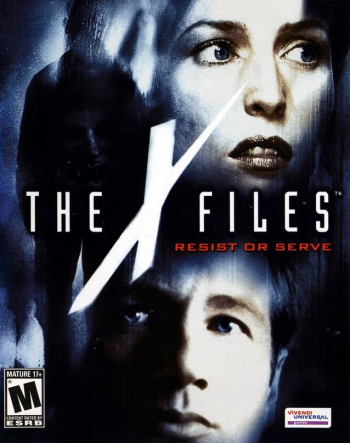 The X-Files: Resist or Serve

Info
1 Images
Interact with the Game: Favorite I'm Playing This I've Played This I Own This I've Beat This Want To Beat This Want To Play This Want To Buy This
The game follows FBI Special Agents Fox Mulder (voiced by David Duchovny) and Dana Scully (voiced by Gillian Anderson) as they travel to a small town in the Rocky Mountains to dig into the source of some strange and unexplained murders. Sightings of ghostly apparitions, zombies and hints of alien presence lead them on a chase for an "inhuman" killer. During the course of the story, Mulder and Scully follow leads to a remote location in Russia and then discover, and search, a mysterious half-buried alien space ship. Players can play as Mulder or Scully as they attempt to prevent alien colonization of Earth.
Game Info
Franchise: The X-Files
Released: 2004-03-16
ESRB: M - Mature
Publisher: Vivendi
Developer: Black Ops
Platforms: Sony Playstation 2 PlayStation 2
Genres: Action Adventure
Tags:
Part of the The X-Files Fan Club
The X-Files Fan Club 148 Wallpapers 1 Art 22 Images 3 Avatars 15 Covers 3 Games 2 Movies 1 TV Shows