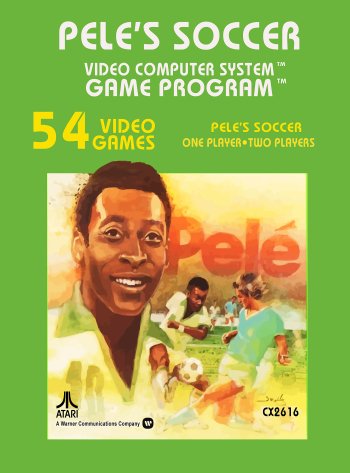 Info
Alpha Coders 3 Images
Interact with the Game: Favorite I'm Playing This I've Played This I Own This I've Beat This Want To Beat This Want To Play This Want To Buy This
Pelé's Soccer is an Atari 2600 game based on the famous football (soccer) player Pelé, and published in 1981. It features basic graphics, ball handing and goal keeping techniques using the Atari joystick. Each team has one forward, two defensemen, and a goaltender on the field at all times. The player's goaltender is always controlled by the computer unless he saves a shot. Each game consists of two halves of various time lengths (depending on the game settings being used). All the forwards and backs run in their proper formation. There are 54 different game variations (27 single-player and 27 multiplayer) that allow for different speeds, game lengths, and goal sizes.
Game Info
Franchise: -
Released: 1981-12-31
Players: 2
Publisher: Atari
Developer: Atari
Platforms: Atari 2600
Genres: Sports Soccer
Tags: