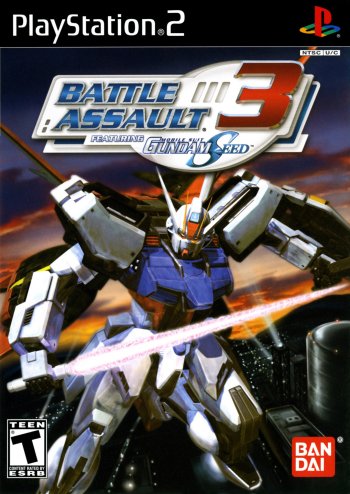 Info
2 Images
Interact with the Game: Favorite I'm Playing This I've Played This I Own This I've Beat This Want To Beat This Want To Play This Want To Buy This
Battle Assault 3 featuring Gundam Seed is the fifth game in the series. It was released on the PlayStation 2, four months after the GBA installment. It was the first to feature full 3D graphics and it also focused on units from the Gundam Seed anime, including grunt mobile suits like GINNs. However, the Wing Gundam Zero Custom, Tallgeese III, Burning (God) Gundam and Master Gundam appear as unlockable secret characters. It was only released in the US. It was built off of the original Gundam Seed game for the PlayStation 2, but modified from an action game into a 3D fighting game.
Game Info
Franchise: Gundam
Released: 2004-12-07
ESRB: T - Teen
Publisher: Bandai
Developer: Bandai
Platforms: Sony Playstation 2
Genres: Action
Tags:
Part of the Gundam Fan Club
Gundam Fan Club 626 Wallpapers 29 Art 168 Images 145 Avatars 490 Gifs 47 Games 12 Movies 18 TV Shows