Info
1 Wallpapers
Interact with the Game: Favorite I'm Playing This I've Played This I Own This I've Beat This Want To Beat This Want To Play This Want To Buy This
The game contains seven levels that are divided in two main sections. The first four levels make up the first section, where the player has to drive an army unit (jeep or helicopter) through a terrain, steering clear of hostile vehicles. In the last three levels that comprise the second main section, one plays as a soldier who shoots enemies along his way. In level 5 the soldier must jump from rock to rock in a river, shooting hostile birds. Thereafter, the soldier makes his way into the enemy headquarters with the goal of retrieving secret documents. Army Moves was regarded as a rather bad game on the Amiga — "Almost non-existent gameplay makes this very poor value for money", according to a review in Zzap!. However, it received mixed reviews from ZX Spectrum magazines and was successful enough in Spain to spawn two follow-ups, Navy Moves in 1988 and Arctic Moves in 1995. The latter appeared only for the PC platform, and it included the first two chapters of the series, playable through a ZX Spectrum emulator, as an extra. A fourth entry in the series, Desert Moves was announced at the end of the game Arctic Moves, but never appeared. The game music in non-Spanish versions is based on the Colonel Bogey March.
Game Info
Franchise: -
Released: 1987-12-31
Players: 2
Publisher: Imagine
Developer: Dinamic
Platforms: Sinclair ZX Spectrum Amiga Amstrad CPC Atari ST Commodore 64 MSX ZX Spectrum PC
Genres: Action Shooter Vehicular Combat
Tags: 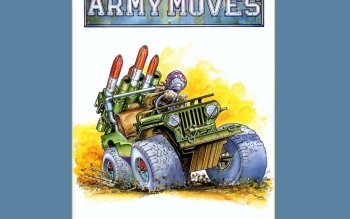