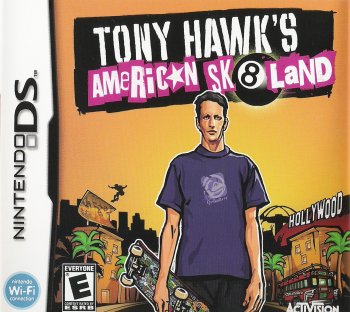 Info
Alpha Coders 3 Images
Interact with the Game: Favorite I'm Playing This I've Played This I Own This I've Beat This Want To Beat This Want To Play This Want To Buy This
Tony Hawk's American Sk8land is the handheld version of American Wasteland, the seventh entry in the Tony Hawk's series. It is the first entry in the series for the Nintendo DS, and the fifth to appear on Game Boy Advance. American Sk8land uses cel shaded visuals and it was developed by Vicarious Visions, the developer of the Game Boy Advance Tony Hawk games. The game is based on its console counterpart, American Wasteland, featuring the same soundtrack, many of the same environments, characters. The top screen is used to display the main gameplay, while the touch screen displays an overhead map of the area the player is currently skating, as well as icons for easily performing tricks. The touch screen is also used to create Skateboard art. Furthering the use of the DS's functions is the ability to record, with the DS microphone, your own sound clips for use in the game. American Sk8land was the first Nintendo DS game released by a third party to support the Nintendo Wi-Fi Connection, the online service for the Nintendo DS. Players are able to play Trick Attack, Score Challenge, Combo Mambo and The Price is Wrong. Players are also able to upload or download graffiti, board art, highscores, and replays to one of the servers, and can periodically download new goals to complete. In the DS version, the ability to get off the skateboard and walk around was removed; however, this was somewhat balanced by the ability to come to a complete stop and rotate the camera. The name is shared by the Game Boy Advance version, also created by Vicarious Visions. The GBA version does not share the same graphics, however, having an isometric point of view, polygonal skaters and pre-rendered levels creating a 3D sensation.
Game Info
Franchise: -
Released: 2005-11-15
ESRB: E - Everyone
Publisher: Activision
Developer: Vicarious Visions
Platforms: Nintendo Game Boy Advance Nintendo DS Game Boy Advance
Genres: Action Sports Skateboarding
Tags: