Interact with the Game: Favorite I'm Playing This I've Played This I Own This I've Beat This Want To Beat This Want To Play This Want To Buy This
PROLOGUE During a peaceful summer in Gensokyo, an unnatural scarlet mist appears without warning and covers much of the land. It is strong enough to block out the sun, causing the affected areas to become dark and cold. Reimu Hakurei, the shrine maiden working at the Hakurei Shrine, is aware of the fact that if let alone, it could possibly spread across the border to the human world; in other words, it is her duty to find the cause of this unnatural weather. Relying on intuition, she heads towards the Misty Lake. Marisa Kirisame, a magician, hopes that the person casting the spell will have some interesting items to collect. Depending on who you choose, only one of these two heroines actually goes out and investigates. MAIN STORY As the heroine leaves to find the source of the mist on the summer night, she is intercepted by Rumia, who is wandering around. The next day, the heroine travels over the Misty Lake, where the mist appears to be originating from. Before reaching her destination, the heroine encounters Cirno, an ice fairy living on the lake. Neither Rumia nor Cirno turned out to be related to the scarlet mist, however. Upon reaching the island, the heroine is immediately attacked by many guards. The offensive is led by Hong Meiling, who is unsuccessful in driving away the intruding heroine from the premises. After the fight, the heroine coerces Meiling into showing her the way to the Scarlet Devil Mansion, and enters it, certain that the person causing the mist is inside. The heroine first looks through a dim library. Koakuma ambushes the heroine, but she is quickly defeated. Her master Patchouli Knowledge tries to stop the heroine from proceeding any further. The heroine then reaches the main hallways, where the chief maid Sakuya Izayoi also tries to stop the heroine from reaching her mistress. After the long journey, the heroine comes face to face with the Scarlet Devil herself, Remilia Scarlet, on the balcony of the Scarlet Devil Mansion. As a vampire, Remilia reveals that the scarlet mist was created so that she could feel comfortable walking out during the day. After a fierce battle, Remilia is defeated and things return to relative normality in Gensokyo.
Game Info
Franchise: -
Released: 2002-08-11
Players: 1
Publisher: Team Shanghai Alice
Developer: Team Shanghai Alice
Platforms: PC
Genres: Shooter
Tags: 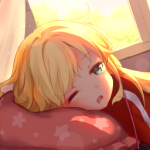