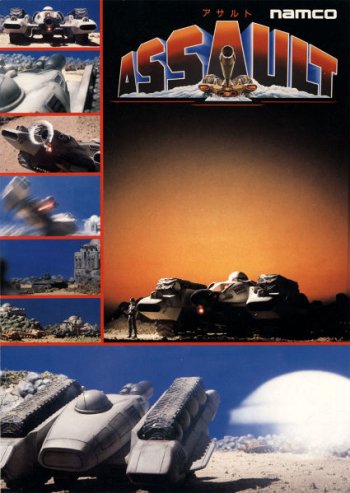 Info
Alpha Coders 1 Images
Interact with the Game: Favorite I'm Playing This I've Played This I Own This I've Beat This Want To Beat This Want To Play This Want To Buy This
In Assault, the player's homeland is invaded by aliens. The next course of action is clear: manning a tank and blasting them away! The goal of each of the eleven levels is to reach the end (occupied by a fortress) and killing the opposition while avoid being hit by their projectiles - at first the player only has to worry about ground forces, but in later stages the tank is also being shot at from above. The game is shown from an overhead perspective, but the tank is always the center of attention: the level rotates around the tank when it is moved. Because of this, it is possible to move in the wrong direction, but when that happens an arrow pops up and shows the right way.
Game Info
Franchise: -
Released: 1988-12-31
Players: 1
Publisher: nam
Developer: Namco
Platforms: Arcade Atari 2600 PlayStation Wii Shop
Genres: Shooter
Tags: