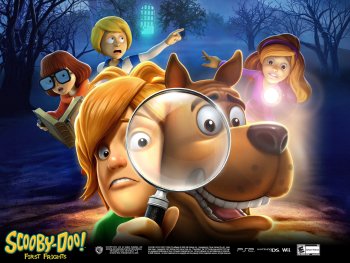 Info
Alpha Coders 2 Images
Interact with the Game: Favorite I'm Playing This I've Played This I Own This I've Beat This Want To Beat This Want To Play This Want To Buy This
Scooby-Doo! First Frights is a 3D platform video game released in 2009. It was developed by Torus Games and published by Warner Bros. Interactive Entertainment. The game tied in with the release of Scooby-Doo! The Mystery Begins on DVD. This is the fourth Scooby-Doo game to use a laugh track. The game contains 22 levels and 4 episodes. You can play as Scooby Doo, Shaggy, Velma, Daphne, or Fred. Scooby Doo has a sausage string to hit with, blocking capability, and the ability to crawl into vents. Shaggy shoots with a slingshot, has blocking capability, and carries a yo-yo to grapple with. Velma throws books, has blocking capability, and can activate machines. Daphne has hand-to-hand combat, flying kick, and can climb up poles. Fred has hand-to-hand combat, stun bombs, and super strength to push crates. Each character has 2 costumes unique to each episode, and one obtainable with a code, with different powers and weapons. Each level has a clue, and at the end of each episode you choose who you think the villain is, based on the evidence you have gathered . You can get trophies for doing certain tasks. You can unlock costumes for each of the 4 villains. You can also play with a friend in multiplayer co-op The gameplay and interface are highly reminiscent of TT Games Lego game series.
Game Info
Franchise: Scooby-Doo
Released: 2009-09-22
ESRB: E - Everyone
Players: 2
Play Modes: Coop
Publisher: THQ Warner Bros. Interactive Entertainment
Developer: Torus Games
Platforms: Nintendo Wii Sony Playstation 2
Genres: Platform
Tags:
Part of the Scooby-Doo Fan Club
Scooby-Doo Fan Club 123 Wallpapers 10 Art 260 Images 28 Avatars 8 Gifs 6 Games 39 Movies 10 TV Shows