Interact with the Game: Favorite I'm Playing This I've Played This I Own This I've Beat This Want To Beat This Want To Play This Want To Buy This
His girlfriend had always had great expectations and one day, by an incredible chance an apple which has fallen right down our caveman's head creates a thought of an aircraft that he can use to earn money. So he makes the machine and uses it for the transport--for picking the other cave friends up and dropping them to their desired destinations. Ugh! is an action game where you must complete 69 levels, riding inside a pedal-powered helicopter to pick up passengers and carry them to their destinations. Each level is made of a series of platforms, with several cave entrances. Cavemen walk out of the caves and loudly announce where they want to go. You have to land your helicopter taxi next to the passenger and wait until he crawls inside (if you land on him, he'll fall into the water at the bottom of the level, although he can still be rescued) and then fly to the cave that he wants to get to. Controlling the vehicle is a bit complicated - you cannot directly fly up or down; instead, you have to keep pedalling to fly up, and cease pedalling when you want to go downwards. Bumping into a wall too hard will cause a game over and force you to restart the level. There is also a time limit for each level. To finish a level, you have to serve a number of customers. There are some dinosaur adversaries on certain levels - a pterodactyl which appears unexpectedly and flies across the screen, and a triceratops which becomes agitated when you land near and charges at your taxi. As you pedal, you exert energy. To refill your energy so that you can keep pedalling, you can pick up a rock and toss it at a tree, making a fruit drop down. Eat the fruit to get more energy.
Game Info
Franchise: -
Released: 1992-12-31
Publisher: Play Byte
Developer: EGOSOFT GmbH
Platforms: PC Amiga Commodore 64
Genres: Action Strategy
Tags: 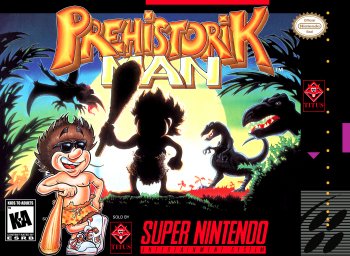