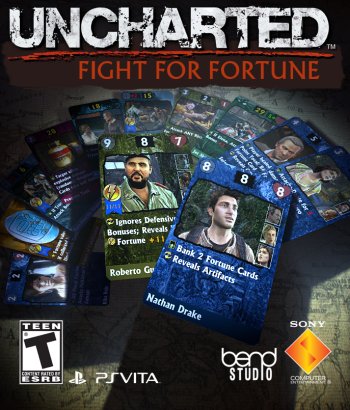 Info
Alpha Coders 1 Images
Interact with the Game: Favorite I'm Playing This I've Played This I Own This I've Beat This Want To Beat This Want To Play This Want To Buy This
Uncharted: Fight For Fortune is an action-adventure turn-based card game featuring the heroes and villains from the Uncharted universe. The core gameplay in Uncharted: Fight for Fortune involves creating a team of Faction cards featuring heroes, villains, and mercenaries from the Uncharted universe, then using that team to defeat your opponent while defending yourself from their attacks. Each Faction card can be equipped with powerful Resource and valuable Fortune cards, which enhance their stats and give them special abilities. Once you've selected and equipped a card, it’s time to head into battle! During combat, attacks either reduce the health of opposing Faction cards or the health of your opponent. Defeating an opposing Faction card removes it from play, while reducing the health of your opponent to zero wins you the game. This downloadable game connects up with the hit PlayStation Vita game Uncharted: Golden Abyss for players who want to further expand their card set. Using the 300 artifacts that can be found within Golden Abyss, you can go to battle with other players as well as AI opponents. The game can also be played independently of Golden Abyss, so owning the PS Vita title is not required.
Game Info
Franchise: Uncharted
Released: 2012-12-04
ESRB: T - Teen
Publisher: Sony
Developer: One Loop Games
Platforms: Sony Playstation Vita PlayStation Network (Vita)
Genres: Puzzle Card Game
Tags:
Part of the Uncharted Fan Club
Uncharted Fan Club 228 Wallpapers 18 Art 151 Images 86 Avatars 11 Gifs 7 Games