Interact with the Game: Favorite I'm Playing This I've Played This I Own This I've Beat This Want To Beat This Want To Play This Want To Buy This
Street Slam is a 3-on-3 street basketball game. One or two players can choose among 10 teams: France, Spain, U.S.A., Italy, Germany, Taiwan, United Kingdom, China, Japan and South Korea (in the European and Japanese versions. The U.S.A. version features local cities). The teams are rated in 1 to 9 points on four attributes (dunk, 3 point, speed and defense). Each game lasts two halves of 2 minutes each. The game ends if the player loses the first half, needing to spend a continue to play the second half. When on offense, the player can perform 2 or 3 point shots by pressing the A button. The B button is used to pass the ball. Pressing A and B together throws the ball high in the air, catching it meanwhile (by pressing A) causes the player to perform a dunk. When on defense, the player can jump and block by pressing A and cut off and steal by pressing B. A fantasy element is added to the game: a super shot meter is shown at the bottom of the screen for each team. As points are scored, the meter is filled. When the meter is full, the player can perform a super dunk by pressing A within the 3 points shot line, making the player jump 10 meters in the air.
Game Info
Franchise: -
Released: 1994-12-09
Players: 2
Publisher: SNK
Developer: Data East
Platforms: NeoGeo Arcade Neo Geo Neo Geo CD Wii Shop Zeebo Xbox One Nintendo Switch
Genres: Sports
Tags: 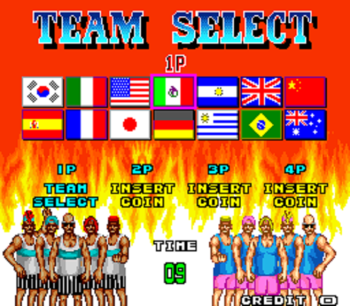