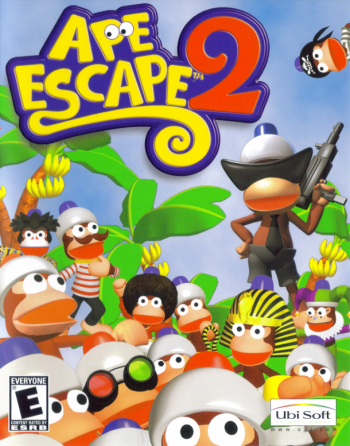 Info
Alpha Coders 5 Images
Interact with the Game: Favorite I'm Playing This I've Played This I Own This I've Beat This Want To Beat This Want To Play This Want To Buy This
Ape Escape 2 is the sequel to Ape Escape. In this platform game it's your goal to catch all the apes jumping, walking and flying around the diverse levels the game has to offer. A large arsenal of gadgets can be used to make it all a little easier, with the catching net being the most important weapons of them all. Other gadgets include a RC Car, to drive over monkey's and collect objects, an Ape Radar, to detect the nearest monkey, a baseball bat, to hit monkeys unconscious, and a magnet, to move certain objects in the maps. Your quest is to catch all monkeys in the levels and to stop the evil Specter from taking over the world. All monkeys in the levels are somewhat unique with their own character abilities and their unique name. Some monkeys just sit on their place, while others attack you with projectiles or run away quickly.
Game Info
Franchise: -
Released: 2002-07-18
ESRB: E - Everyone
Players: 1
Publisher: Sony
Developer: Sony
Platforms: Sony Playstation 2 PlayStation 2 PlayStation 4
Genres: Platform Platformer Action-Adventure
Tags: