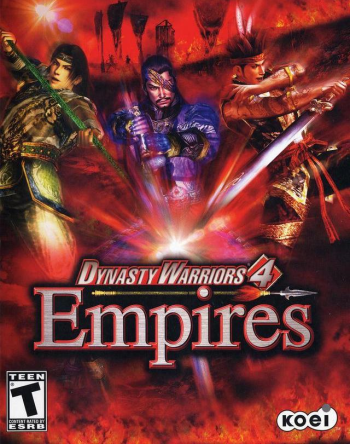 Info
Alpha Coders 1 Images
Interact with the Game: Favorite I'm Playing This I've Played This I Own This I've Beat This Want To Beat This Want To Play This Want To Buy This
Dynasty Warriors 4: Empires is a strategy-oriented variant of Dynasty Warriors 4, mixing it with gameplay similar to Romance of the Three Kingdoms. The heart of the game, campaign mode, begins by choosing any of 24 regions and 42 rulers (custom characters can be created). Beginning with a small kingdom, the ultimate goal is the conquering of all others. Each turn, the player is given a choice from 4 different governing options (brought to your attention by your generals) followed by a single decision of action. These actions typically include the invasion or defense of a specific province or the option to aid an allied empire with those same actions.
Game Info
Franchise: Dynasty Warriors
Released: 2004-08-31
ESRB: T - Teen
Publisher: KOEI
Developer: Omega Force
Platforms: Sony Playstation 2 PlayStation 2
Genres: Action Strategy Role-Playing
Tags:
Part of the Dynasty Warriors Fan Club
Dynasty Warriors Fan Club 7 Wallpapers 24 Images 1 Avatars 31 Games