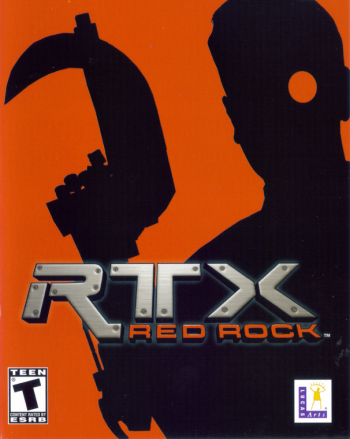 Info
3 Images
Interact with the Game: Favorite I'm Playing This I've Played This I Own This I've Beat This Want To Beat This Want To Play This Want To Buy This
In this game the player controls Major Eugene Wheeler, a radical tactics expert sent to the Mars base to investigate the loss of communications. Once there, he discovers that the base has been taken over by alien invaders who plan to use it to launch an attack on Earth. Wheeler must use all his wits and skills to prevent this from happening. RTX: Red Rock is a third-person action-adventure game which splits itself between combat with a multitude of weapons and some puzzle-solving. The protagonist is also equipped with a robotic arm with multiple attachments and a 'bionic' eye which gives him four different vision modes. The game is comprised of ten levels, some of which involve driving vehicles and controlling robots.
Game Info
Franchise: -
Released: 2003-06-17
ESRB: T - Teen
Publisher: LucasArts
Developer: LucasArts
Platforms: Sony Playstation 2 PlayStation 2
Genres: Action Adventure
Tags: