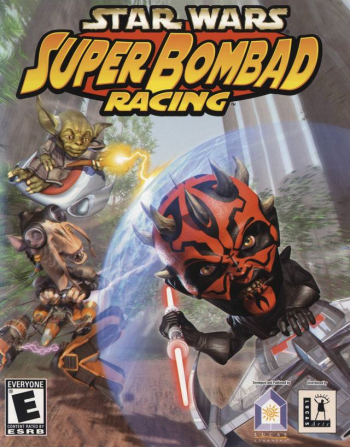 Info
1 Images
Interact with the Game: Favorite I'm Playing This I've Played This I Own This I've Beat This Want To Beat This Want To Play This Want To Buy This
It's Star Wars like you have never seen it before. Each character, from Episode 1, looks more like something from a Japanese animation. While flying around the many familiar landscapes (Tatooine, the underwater village Otoh Gunga and a driod control ship in orbit over Naboo) your character can use the many weapons and power-ups that litter the tracks, as well as using moves that only they can perform. For example. Jar-Jar uses his tongue to grab onto anyone in front of him, so he can catch up, while Darth Maul throws his double edged lightsaber as a very deadly weapon. Also keep an eye out for monsters and items that get in the way on the track. Some may be useful, others very annoying.
Game Info
Franchise: Star Wars
Released: 2001-04-23
ESRB: E - Everyone
Publisher: LucasArts
Developer: Lucas Learning
Platforms: Sony Playstation 2 PlayStation 2
Genres: Racing Driving/Racing
Tags:
Part of the Star Wars Fan Club
Star Wars Fan Club 3775 Wallpapers 848 Art 2266 Images 2882 Avatars 543 Gifs 105 Games 37 Movies 7 TV Shows 5 Discussions