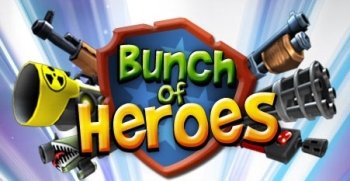 Info
2 Images
Interact with the Game: Favorite I'm Playing This I've Played This I Own This I've Beat This Want To Beat This Want To Play This Want To Buy This
Bunch of Heroes is a humorous 4 player cooperative top-down shooter for Windows through Steam. The game has online co-op with up to 4 players. The Bunch, is the most formidable team of fighters from different parts of the world ever assembled. In the game the Earth is under attack, An Alien Invasion is threatening all of humankind, with no regard to gender, color or nationality. And these nasty Aliens have a powerful Zombie Army. “Bunch of Heroes” features stylized cartoon like artwork, retro inspired music, cutting edge technology, great humor and cooperative gameplay to inspire zombie killers and Alien haters alike all over the world.
Game Info
Franchise: -
Released: 2012-12-31
Players: 4+
Play Modes: Coop
Publisher: NGD Studios
Developer: NGD Studios
Platforms: PC
Genres: Shooter Action Shoot 'Em Up
Tags: