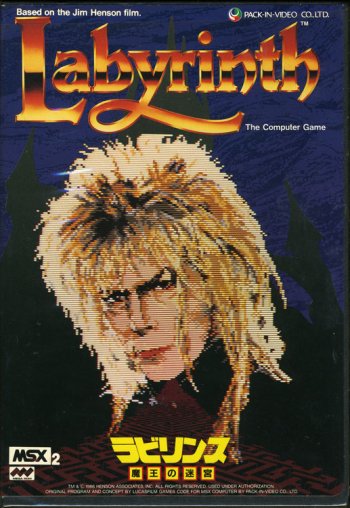 Info
Alpha Coders 1 Images
Interact with the Game: Favorite I'm Playing This I've Played This I Own This I've Beat This Want To Beat This Want To Play This Want To Buy This
Labyrinth: The Computer Game is a graphic adventure computer game, inspired by the Jim Henson fantasy film, Labyrinth. The game was developed by Lucasfilm Games (now LucasArts) and published by Activision in 1986 for the Apple IIe and IIc, Commodore 64/128, and MSX2. It was the first adventure game to be developed by the LucasArts development house, and as such it can be seen as a more primitive precursor to the development of the SCUMM game engine. It is also one of the few adventure games made by the company to not use a variation of the SCUMM game engine (the other games being the GrimE-based Grim Fandango and Escape from Monkey Island). The game engine and graphics are very similar to a later work by Lucasfilm Games called Habitat.
Game Info
Franchise: -
Released: 1986-12-31
Developer:
Platforms: Commodore 64 Apple II MSX
Genres: Adventure
Tags: