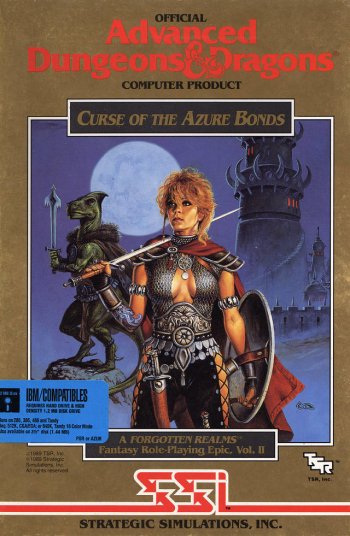 Info
Alpha Coders 1 Images
Interact with the Game: Favorite I'm Playing This I've Played This I Own This I've Beat This Want To Beat This Want To Play This Want To Buy This
At the start of the game, the player characters are adventurers of great renown who wake up from a magic sleep to find themselves in a small inn in the city of Tilverton, with all of their possessions stolen and no memory of how it happened.[7] A passing landlord informs the characters that they have been unconscious for over a month after suffering an attack. Each of the player characters has five azure-colored tattoo-like markings, called bonds, on one arm.[6] The party had been ambushed while traveling on the road to Tilverton.[2] They were captured and cursed with the magical bonds embedded on their arms; the characters' quest is to get rid of them.[4] Characters can visit the sage Filani, who will give them information about the bonds.[2] Each bond represents a different evil faction, and through the bonds, which are the result of a possession-like spell and glow when active, the factions can control the actions of the characters.[6] The first bond forces the characters to attack the royal carriage as it goes past, resulting in a fight with some royal guards.[6] The characters begin searching for the first controlling faction, a band of assassins known as the Fire Knives. After defeating the Fire Knives and ridding themselves of the first bond, the characters are banished from Tilverton for trying to kill the King. The characters may then journey to Shadowdale or Ashabenford. The player then spends the rest of the game deciding where to go next to remove another bond.[2] As the story continues, the adventurers confront the King of Cormyr and his princess, rescue Dimswart the Sage, locate three artifacts, and explore Dagger Falls.[7] Princess Nacacia of Cormyr went missing a year ago, when she fled to escape a marriage arranged by her father, and it is up to the party to find her.[9] The game combines mini-adventures with major adventures in the quest to remove the Azure Bonds. In the game's climactic battle, the adventurers take on an old foe back from the dead.[7] The remaining four bonds are controlled by Mogion, leader of the cult of Moander, Dracandros the Red Wizard, Fzoul Chembryl and his beholder allies, and Tyranthraxus, the main antagonist from Pool of Radiance. The cult of Moander is based in Yulash, where the characters encounter Alias and Dragonbait, who can join the party. After defeating the cult, the party must also defeat three Bits O' Moander, which behave as powerful shambling mounds. Dracandros is found in the Red Tower in Haptooth, and the characters will face a beholder in Zhentil Keep, along with a troop of minotaurs and a medusa.[2] After removing two bonds, characters may use the Search command on the wilderness map to locate mini-dungeons under certain towns; these caverns are dangerous, but the party can gain both experience and treasure in them. When four of the bonds have been removed, the characters go on to the final showdown with Tyranthraxus, who takes the form of a storm giant, in the ruins of Myth Drannor. After defeating Tyranthraxus, the game ends.[2]
Game Info
Franchise: -
Released: 1989-01-01
Players: 1
Publisher: Strategic Simulations Inc,
Developer: Strategic Simulations Inc.
Platforms: PC Amiga Apple II Atari ST Commodore 64 Mac
Genres: Role-Playing
Tags: