Interact with the Game: Favorite I'm Playing This I've Played This I Own This I've Beat This Want To Beat This Want To Play This Want To Buy This
YOU'RE CORDIALLY INVITED TO THE GALAXY'S HOTTEST COOKOUT! Smell the challenge, as the flames of destruction scorch your courage and ignite your fears. Just when you thought life was cool, the Bacterion Beast Squadron launches a massive counterattack that makes all other intergalactic battles seen like picnics. These plutonian chow hounds are starving for a victory. And if you're not careful, they'll char your hide, then serve you up like a stuffed Sarubian Space Pig! -Two megs memory intensifies five unbelievable new levels of deep space devastation. -Plot the galaxy's most feared fighter, and out-blast hundreds of psychotic space freaks who'll roast your tail with weapons unlike any you've ever encountered. -Unique duel scrolling battlefield speeds up the action and adds 3D effects to the carnage. -Select from three different pre-attack modes: Intruder Missiles, Laser Warfare and Double Guns 'A Blazing. -Capture Power-Up Spheres and increase your firepower with Ripple Blasts, Multiple Warheads, Ghost Fighters and Force Fields. -Sharpen your tactics in "Practice Galaxy" where you can increase your odds of survival... slightly!
Game Info
Platforms: Nintendo Game Boy Game Boy
Franchise: -
Released: 1991-06-01
Players: 1
Publisher: Konami
Developer: Konami
Rating: 0.00
Genres:
Tags: 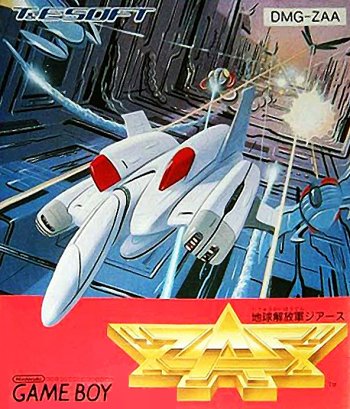