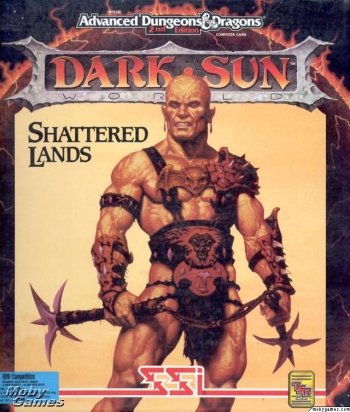 Info
2 Images
Interact with the Game: Favorite I'm Playing This I've Played This I Own This I've Beat This Want To Beat This Want To Play This Want To Buy This
The world of Athas was once peaceful and pleasant - until wizards found a way to increase their power by draining the planet's energy. Athas gradually turned into a desert, its seas evaporating, its sun transforming into an ominous crimson fireball. The wizards then gained control over the land, becoming sorcerer-kings and enslaving most of the population. One of such kings, Tectuktitlay, rules the city-state of Draj. By his orders, a group of slaves is sent to a battle arena where they have to fight monsters as gladiators. However, that group manages to escape the slave pens. They have to contact the leaders of independent villages built by former slaves, and unite in a battle against Draj's oppression. Dark Sun: Shattered Lands is an AD&D game based on the Dark Sun campaign pack by TSR. The player can control a pre-generated party of four characters or create new ones at the beginning. There are eight available races, including half-giants and the exotic insect-like thri-kreen alongside the more traditional ones. Eight character classes are available: Fighter, Ranger, Gladiator, Cleric, Druid, Preserver, Psionicist, and Thief. Psionic powers constitute a separate spellcasting discipline that comes in three varieties: psychokinetic, psychometabolic, and telepathic. The entire game is viewed from an overhead perspective. The game world is composed out of numerous large interconnected areas, which include outdoor locations, dungeons, and settlements. Following the completion of the first two areas, the player is free to roam the world and access its locations in any order. There are several tasks that have to be fulfilled in order to complete the game, but the player is also given a considerable degree of freedom concerning his treatment of NPCs and the way quests are solved. There are various sub-quests in the game as well. Multiple-choice dialogues are used for interaction with characters. The turn-based battles are seamless, taking place on the exploration screen without any other confines. The game is not particularly combat-heavy and many confrontations can be solved peacefully. During combat, the player navigates characters in a tactical fashion, using melee and ranged weapons as well as various spells. Character-building and attributed are in accordance with traditional AD&D rules, including armor class rating, choosing spells to memorize when leveling up, etc.
Game Info
Franchise: -
Released: 1993-01-04
ESRB: E - Everyone
Players: 1
Publisher: Strategic Simulations, Inc.
Developer: Strategic Simulations, Inc.
Platforms: PC
Genres: Role-Playing
Tags:

Age of Fear: The Undead King