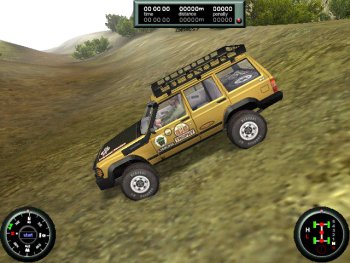 Info
Alpha Coders 2 Images
Interact with the Game: Favorite I'm Playing This I've Played This I Own This I've Beat This Want To Beat This Want To Play This Want To Buy This
Screamer 4x4 is a 4x4 off-road game, designed by Hungarian-based Clever's Interactive. It makes use of graphics hardware acceleration, allowing to choose between Glide, Direct3D and OpenGL renderers. Unlike nearly all other off-roading games, the emphasis is not on racing but on passing through checkpoints laid out at specific points in such a way that the player is forced to navigate difficult terrain. Other modes are available as well, such as Pathfinder, which gives only a handful of checkpoints spread out over the terrain and leaves it up to the player to decide how to reach each one (although each must still be passed in a predetermined order). Penalties are given in all modes for hitting checkpoint markers and for using the recovery service to flip an overturned vehicle, and you are immediately disqualified for hitting any bystanders. The game contains details such as car damage due to accidents & rough driving, varying weather conditions and unlockable upgrades to your vehicle in the form of engines, tires and differentials. There are a few different areas to drive on, although all but the first two must be unlocked through the career mode. Unfortunately the only variations in the maps are from the geography and the textures used, as there is no difference in handling from one surface to another.
Game Info
Franchise: -
Released: 2001-12-31
ESRB: E - Everyone
Players: 4+
Publisher: Virgin
Developer: Channel 42 Software Developer
Platforms: PC
Genres: Racing Driving/Racing Simulation
Tags: