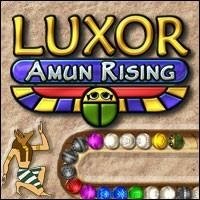 Info
Alpha Coders 1 Images
Interact with the Game: Favorite I'm Playing This I've Played This I Own This I've Beat This Want To Beat This Want To Play This Want To Buy This
Luxor: Amun Rising, the sequel to Luxor, is an arcade style action-puzzle game. The player goes on an adventure, travelling across a map of ancient Egypt, with each of the 88 levels getting progressively harder. There is a choice of three difficulty levels: easy, intermediate or expert. The player controls a winged scarab which travels side to side along the bottom of the screen. The player shoots one of seven colored spheres at a line of approaching spheres traveling along a path. You must prevent the spheres from reaching your pyramids, or the level is over. Making a match of three or more will make the enemy spheres explode. Exploding spheres can drop coins, which you collect to get extra lives. They can also drop power ups, which help to destroy the enemy spheres. The power ups are very helpful. There is a wild ball which matches any color, there's a lightning bolt that blasts through spheres, and a fireball that explodes any sphere in its blast radius. Other power ups make the approaching spheres slow down, stop or even reverse direction for a short time. One power up makes you shoot faster, and has a beam of light to aid with aiming. They added a new power up, the scorpion, which speeds out of the pyramid and destroys the first ten spheres it encounters. The player can create a profile, and the player's progress is stored for future play. If the game is lost, then the player can start a new game on the furthest stage attained.
Game Info
Franchise: -
Released: 2012-09-03
Publisher: MumboJumbo, LLC
Developer: MumboJumbo, LLC
Platforms: PC Mac
Genres: Action Puzzle
Tags: