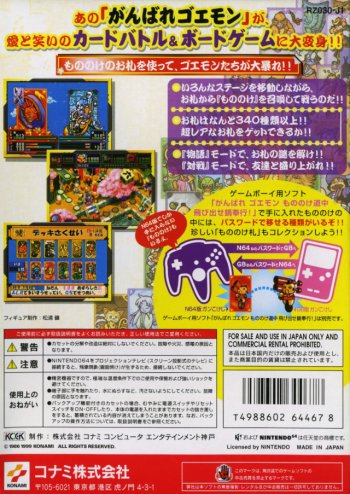 Info
Alpha Coders 2 Images
Interact with the Game: Favorite I'm Playing This I've Played This I Own This I've Beat This Want To Beat This Want To Play This Want To Buy This
Goemon: Mononoke Sugoroku is a video game for the Nintendo 64, released in 1999. The game is based on the Ganbare Goemon series and despite the series' relative popularity in the west for the system, the game was released only in Japan. The game is based on the Japanese board game Sugoroku, populated with Konami's array of Ganbare Goemon characters. Up to four players control two dice, and take it in turns to control Goemon, Ebisumaru, Sasuke, or Yae over prerendered boards that resemble previous locations in the Ganbare Goemon series.
Game Info
Franchise: -
Released: 1999-12-25
Publisher: Konami
Developer: Konami
Platforms: Nintendo 64
Genres: Action Strategy
Tags: