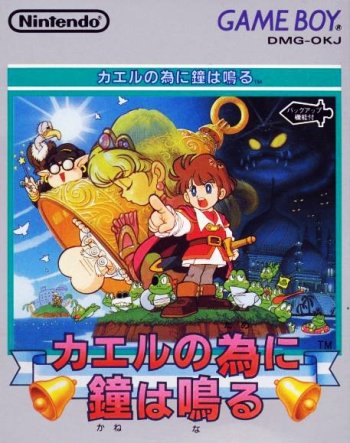 Info
Alpha Coders 1 Images
Interact with the Game: Favorite I'm Playing This I've Played This I Own This I've Beat This Want To Beat This Want To Play This Want To Buy This
In a land far away, the two princes—Richard (of the Custard Kingdom) and the game's main protagonist (prince of the Sablé Kingdom)—have shared a friendly rivalry since they were small children. They often compete, although it usually ends in a tie or close win. In Fencing however, Prince Richard is always the victor. One day a messenger arrives from a small neighboring kingdom, warning the princes that the evil King Delarin has invaded the Mille-Feuille Kingdom and captured the beautiful princess Tiramisu. In yet another boastful attempt to best the Sablé Prince, Richard grabs a boat and rushes towards the kingdom. The Sablé Prince is left trying to catch up. While on his journey, he and Richard (and many others) are transformed into frogs in an attempt to reveal the true happenings in this kingdom.
Game Info
Franchise: -
Released: 1992-09-14
Players: 1
Publisher: Nintendo
Developer: Intelligent Systems
Platforms: Nintendo Game Boy Game Boy Nintendo 3DS eShop
Genres: Action Role-Playing
Tags: