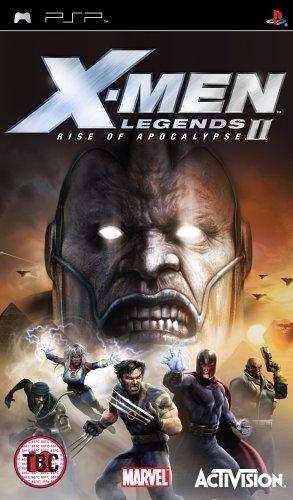 Interact with the Game: Favorite I'm Playing This I've Played This I Own This I've Beat This Want To Beat This Want To Play This Want To Buy This
X-Men Legends II: Rise of Apocalypse is an action role-playing game developed primarily by Raven Software and published by Activision. It is the follow up to 2004's X-Men Legends. It was first released in September 2005 for the GameCube, Microsoft Windows, N-Gage, PlayStation 2, PlayStation Portable and Xbox video game platforms. It is set after the events of X-Men Legends and features the mutant supervillain Apocalypse as the primary antagonist. The developers intended the game to have a greater sense of scale than its predecessor, and writers created a story where the villains known as the Brotherhood of Mutants would need to ally themselves with the heroic X-Men to defeat a greater threat. High quality cinematics were created by Blur Studio. Online multiplayer was also added. The game was well received by gaming critics on all platforms. Critics felt that the inclusion of online play, additional mutant powers, and a larger cast made the game an improvement over its predecessor. Some reviewers were critical of the game's voice acting and felt that the gameplay was repetitive. It sold enough copies to be added to the budget line known as PlayStation 2's Greatest Hits.
Game Info
Franchise: X-Men
Released: 0000-00-00
ESRB: T - Teen
Players: 1
Publisher:
Developer:
Platforms: Sony PSP Sony Playstation Portable
Genres: Adventure
Tags:
Part of the X-Men Fan Club
X-Men Fan Club 1451 Wallpapers 701 Art 755 Images 269 Avatars 60 Gifs 151 Covers 27 Games 18 Movies 6 TV Shows 5 Discussions