Interact with the Game: Favorite I'm Playing This I've Played This I Own This I've Beat This Want To Beat This Want To Play This Want To Buy This
Artelius is a Role-Playing game, developed and published by Nihon Bussan, which was released in Japan in 1987. An advanced civilization once flourished in a fictional solar system. One day, a black hole appeared and sucked everyone who lived there into another dimension. This parallel universe came to be known as Artelius. Ruled by the diabolical king Sarbelor, he controls a machine that has split the universe into spaces filled with asteroid belts. A cyborg has been built by a scientist named Dr. Rado in order to defeat Sarbelor; only he has been entrusted with this mission to save Artelius from the evil king's reign.
Game Info
Franchise: -
Released: 1987-11-13
Players: 1
Publisher: Nihon Bussan
Developer: Nihon Bussan
Platforms: Nintendo Entertainment System (NES) Nintendo Entertainment System
Genres: Role-Playing Shooter
Tags: 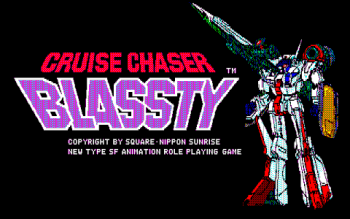