Interact with the Game: Favorite I'm Playing This I've Played This I Own This I've Beat This Want To Beat This Want To Play This Want To Buy This
In Urusei Yatsura: Lum's Wedding Bell (うる星やつら ラムのウェディングベル Urusei Yatsura: Ramu no Uedingu Beru?), the player controls Lum as she grows up and has to avoid alien invaders while trying to reach her rescue UFO. The game's storyline involves a severe earthquake striking in Tomobiki-cho (the town where the Urusei Yatsura series takes place) and tearing the space-time continuum, forcing Lum to have to travel forward through time in order to be reunited with her "darling" Ataru Moroboshi. The player starts out at infant school, then works her way to elementary school, junior high school, high school, college, and finally the player gets married to a bridegroom (Ataru) in a white tie outfit. After that, the game starts over again. The game has never been released outside Japan.
Game Info
Franchise: -
Released: 1986-12-31
Players: 2
Publisher: Jaleco Entertainment
Developer: TOSE
Platforms: Nintendo Entertainment System (NES) Nintendo Entertainment System Arcade
Genres: Platform Platformer
Tags: 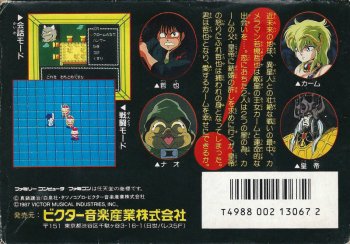