Interact with the Game: Favorite I'm Playing This I've Played This I Own This I've Beat This Want To Beat This Want To Play This Want To Buy This
Famicom Jump: Hero Retsuden (ファミコンジャンプ 英雄列伝 Famikon Janpu Hīrō Retsuden?, the subtitle translates to "History of Heroes") is a 1989 role-playing video game for the Family Computer published by Bandai. The game commemorates the 20th anniversary of Shueisha's manga anthology Weekly Shōnen Jump. Set in a world that brings together many of the long-running titles that had appeared in the magazine, both of the past and present at the time of its release. The game consists of a main character wandering and encountering the many Jump heroes as they try to save the world from an alliance of many of the most powerful and evil of the Jump villains.
Game Info
Platforms: Nintendo Entertainment System (NES) Nintendo Entertainment System
Franchise: -
Released: 1989-02-15
Players: 1
Publisher: Bandai
Developer: TOSE
Rating: 0.00
Genres:
Tags: 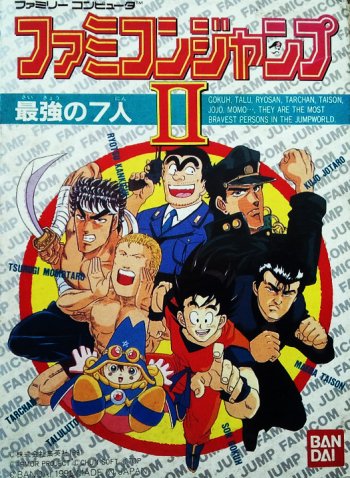