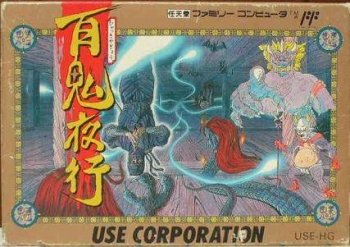 Info
Alpha Coders 1 Images
Interact with the Game: Favorite I'm Playing This I've Played This I Own This I've Beat This Want To Beat This Want To Play This Want To Buy This
Hyakkiyakou is named after the Night Parade of the 100 Demons of Japanese folklore, when various youkai and other Japanese demons come out of hiding for a single night to scare people. The game is otherwise a fairly traditional 8-bit RPG, though it does feature uncommon aspects such as being able to see enemies while walking around (as opposed to the then-usual random encounters) and a regularly-proportioned adult protagonist. There is also no overworld map - both the towns and monster-infested wilderness are directly connected.
Game Info
Franchise: -
Released: 1989-02-22
Players: 1
Publisher: Use Corporation
Developer: Use Corporation
Platforms: Nintendo Entertainment System (NES) Nintendo Entertainment System
Genres: Role-Playing
Tags: