Interact with the Game: Favorite I'm Playing This I've Played This I Own This I've Beat This Want To Beat This Want To Play This Want To Buy This
Sonic Crackers is an early prototype build of the game Knuckles' Chaotix, incorporating many of the elements that would appear in the final game. Its name comes from a peculiar, and clearly quickly made, ASCII-art title screen. Sonic Crackers is thought to be an engine test, composed of various different game engines, which are swapped out using RAM coding. The game features Sonic and Tails, who, in the main demonstration of its link to Knuckles' Chaotix, are held together by rings that they carry and that are joined by an elastic force. Also, Sonic can pick up Tails and throw him upwards, to make it easier to reach higher platforms. The stages and music are also similar to those in Chaotix. There are no sound effects at all during gameplay. There are no badniks to be found, however there are spikes, and you lose rings when hitting them (even though you have none).
Game Info
Franchise: -
Released: 2009-04-20
Players: 2
Publisher: Jaleco Entertainment
Developer: Jaleco Entertainment
Platforms: Nintendo Entertainment System (NES) Sega Genesis Genesis
Genres: Platform
Tags: 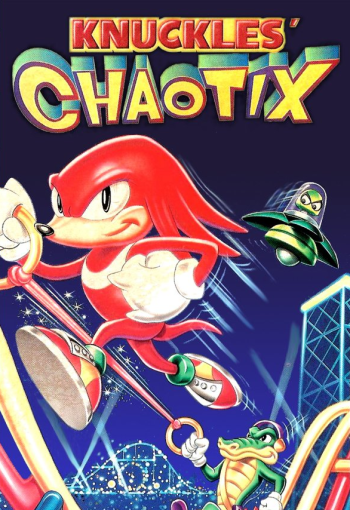